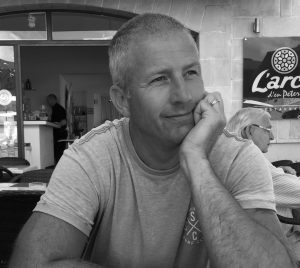 I was born in 1968 in Walthamstow, London but have lived in Norfolk since the age of five. I have a wife Emma and two children, Adam and Sophie.

I’ve always had a love of action thriller books, Lee Child’s Jack Reacher and Vince Flynn’s Mitch Rapp and Tom Wood’s Victor. My love of action movies, Die Hard, Daniel Craig’s Bond and Jason Statham in The Transporter. Don’t get me started on Guy Richie’s Lock Stock or Snatch. The harder and faster the action the better, with a bit of humour thrown in to move it along.

Call it a mid-life crisis or a need to let my creative monster out, with the big 50 approaching I sat down threw all of the above in a blender and started writing Execution of Faith. A supercharged, action packed roller coaster of a ride that doesn’t take itself too seriously. That went so well I wrote a prequel Vodka and Jellied Eels, which due to the time line was made the first in the Danny Pearson Thriller Series.

“1000 miles and hour. Action packed is an understatement. Found myself holding my breath.”

“Rapp, Reacher watch out, there’s a new guy on the streets, and he’s damn good at what he does
An entertaining way to pass the time.”

CRACKING GALLOPING RIDE OF A STORY ***** Joolz B